A jewelled chalice has been rediscovered during an audit of our extensive collections as part of the Lincoln Cathedral Connected project.

Research undertaken by the Connected team found the chalice – designed by William Butterfield, a leading Gothic Revival architect and designer in 1887 – in storage in the Cathedral’s collections, where it had been previously wrongly catalogued as belonging to Bishop Edward Lee Hicks, who was Bishop of Lincoln between 1910 and 1919.

The jewels adorning the chalice, which include turquoise, amethyst and opals, are believed to have belonged to the wife of Dean William Butler, who served as Dean from 1885 until his death in 1894. 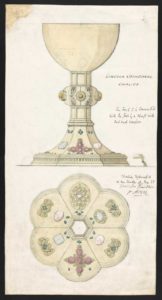 The chalice, along with an accompanying small silver dish known as a paten, were gifts to the church from the Dean and ‘Friends to the Cathedral’ and are believed to have been specially made to be used at Easter in 1887. Records show that the chalice was valued at the time and was deemed to be worth more than £4,000 in today’s money.

The team noticed that an element of the chalice – a small golden scroll work with four turquoise stones – was missing, prompting a search for the piece. The piece was found a few weeks later in a box mislabelled as a button.

Many other exciting artefacts have been found as part of the research audit, including an extremely rare 12th century seal matrix used by the Dean and Chapter to officially give documents the seal of approval and a 400-year old ‘Clock Jack’; a wooden knight approximately three feet tall believed to have once been a part of a clock at the Cathedral.

The aforementioned pieces will be displayed alongside other artefacts at Lincoln Cathedral’s new visitor centre, which is due to open in 2020, the exhibition spaces of which are currently being designed by Edinburgh-based design specialists Campbell & Co.

Fern Dawson, collections and engagement officer at Lincoln Cathedral, said: “The chalice and the other fascinating finds have not only given us a glimpse into the past, but have also helped us to better understand the history of the Cathedral – one of Britain’s most extraordinary landmarks.

“It’s also been an exciting time at the Cathedral as we recently appointed Campbell & Co to design the exhibition space and Treasury where these artefacts will be displayed. The designs are already looking great and we can’t wait to see the finished space.”

Anne Jenkins, director, England: Midlands & East, The National Lottery Heritage Fund, said: “Not only is National Lottery funding playing a huge part in restoring and renovating Lincoln Cathedral, it is also helping to unearth and safeguard nationally significant lost treasures, like this rare William Butterfield chalice. It will be exciting to see it on display in the new visitor centre in 2020 alongside other wonderful artefacts, enabling more and more people to discover the fascinating history of the Cathedral.”

David Campbell, managing director at Campbell & Co, said: “We’re delighted to be involved with the Lincoln Cathedral Connected project; with the opportunity to design new captivating exhibitions that will draw together the history and heritage of this great English cathedral.

“Through a series of linked interpretive exhibits, visitors will be able to experience the Cathedral’s majestic interior and its external precinct, explore a new museum, discovery zone and an interactive learning and activity centre. These exciting plans are taking shape and are designed for people of all ages to visit and learn about the cathedral’s and Lincoln’s fascinating history.”

From the research audits to extensive restoration works, the Connected project, which is made possible by The National Lottery Heritage Fund, aims to protect the Cathedral and create new spaces for visitors to enjoy.