Toni creates paintings inspired by medieval manuscripts, using techniques passed down through the ages. Initially attracted by the beauty of these old books, their pages ‘illuminated’ by areas of gold leaf which caught the light as the page was turned, she tried to find out how such things had been created. However, in our fast-paced world, where artists’ paint comes in tubes bought online and there is little interest in the time-consuming arts of grinding pigments or applying gold to vellum, she found the knowledge hard to come by.

However, after an abortive trip to Italy to learn how to gild (the tutor knew less than he claimed!) Toni discovered The Prince’s School of Traditional Arts in London. It was here that she learnt how to illuminate a manuscript, extract pigments from rocks, roots and berries and make them into paint, and create paintings on traditionally prepared panels with egg tempera. She now holds a Diploma in Traditional Art, has many years’ experience and has taken masterclasses with some of the few remaining professional illuminators in the country. In her turn, teaches these skills to others who are interested.

2015 saw her being commissioned by the Historic Lincoln Trust to create a range of work based on the Luttrell Psalter, Lincolnshire’s own unique fourteenth century manuscript. She was also honoured to create a piece for HRH The Duke of Gloucester which was presented to him on the opening of The Great Exhibition.

The post of artist in residence is advertised within the Cathedral. The inspiration which could be gained from working in a medieval building with its own collection of manuscripts was impossible to resist. An application duly followed.

Toni is creating a body of work for an exhibition in September this year. Some pieces will be re-creations of illuminated letters and images found in the Cathedral’s own manuscripts, bringing them to a wider audience than is usually possible. These are made using, as far as is possible, pigments which would have been used originally such as malachite, azurite and natural earth colours hand-ground from local stones. Others will depict various aspects of both the history and modern life of the Cathedral. She is also making a start on a Lincoln Cathedral Bestiary, a collection of illuminated paintings of the numerous animals and birds found in the fabric of the building. The majority of her work is embellished with 24 carat gold leaf, although Toni also uses copper, white gold and palladium. 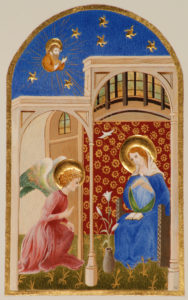 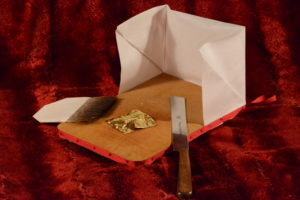 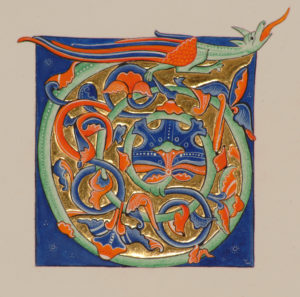