Lincoln Cathedral’s famous west front has become a place of dedication and remembrance for casualties of conflict, particularly the First World War.

More than 1,000 people have remembered the fallen by dedicating poppy crosses in a special memorial garden created outside the Cathedral. 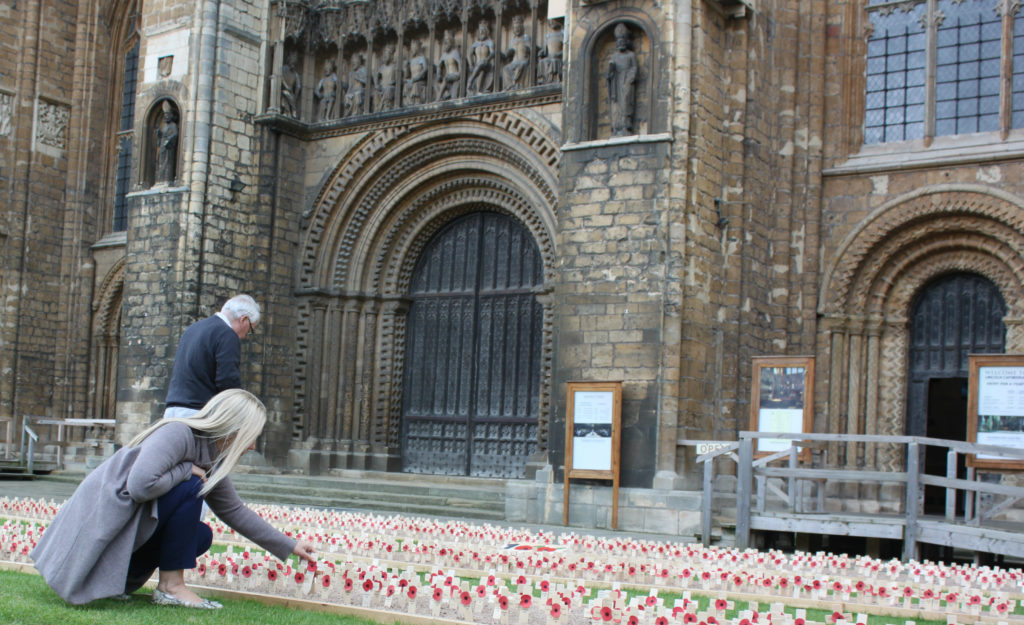 The garden marks the 100th anniversary of the beginning of the Battle of the Somme, which cost more than 420,000 British lives, of which more than 1,600 were from Lincolnshire. People from across Lincolnshire, and from all over the country, have paid their respects to the memory of those from all walks of life by naming a poppy cross and placing it in the garden.

A commemorative carving has been created by the Cathedral’s stonemasons as a lasting memorial to the conflict, which will sit alongside the Cathedral’s many other permanent memorials to the armed forces and to war.

Mr Tony Goodwin BEM, Lincolnshire County Chairman of the Royal British Legion, said: “We owe an immense debt of gratitude to our armed forces and veterans.

“This year, as we mark the 100th anniversary of the Battle of the Somme, there is an even greater opportunity for us to remember those who took park in First World War, and the impact of the conflict here in Lincolnshire.

The acting Dean of Lincoln, the Revd Canon John Patrick, said: “Remembrance is a significant part of the life of Lincoln Cathedral. We have a long and proud relationship with the armed forces, and the Cathedral’s many memorials to the fallen have enriched the lives of many thousands of people each year.

“In creating the memorial garden, we wanted to create a fitting tribute, dedicated to all those who have lost their lives, or have suffered as a result of war. Prayer and contemplation is at heart of the ministry of Lincoln Cathedral, and it is a privilege for us to work with the Royal British Legion in creating a place for remembrance.”

The memorial garden will remain available at the Cathedral until 12 July, at which point it will be moved to its new home at the Museum of Lincolnshire Life.

The Cathedral’s Morning Chapel will remain the home of an exhibition entitled War: Past, Present and Reconciliation until the autumn.