Birds in the Cathedral Library

Throughout the restrictions placed on us during 2020/2021, many of us have taken the opportunity to reconnect with nature either by spending more time in our gardens or going for walks in the surrounding countryside.  It is believed that watching birds and listening to birdsong can help us to relax and de-stress, so here follows a selection of some of the birds that can be found in our books and manuscripts.

Many of the Cathedral’s oldest manuscripts have decorated capital letters often containing images of foliage, animals and birds.

A very early example can be found in a 12th century copy of “Commentaries on the Gospel of St John”.  In the first image we see St John seated and writing, with a dove representing the Holy Spirit dictating to him. 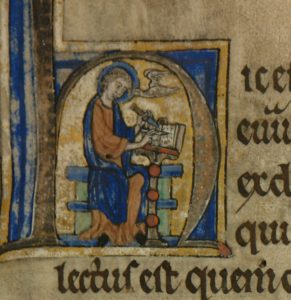 In art, St John is often pictured with an eagle and his eagle appears on the following page in the same manuscript in the centre of a capital I beginning the words In principio. (In the beginning).  This is an illuminated capital: it has been decorated with gold leaf. 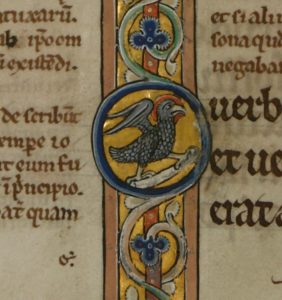 The following example of a duck biting an eel can be found at the foot of a capital letter P in a 13th century copy of a Latin Bible.  The illustrations did not always bear any relevance to the text that they accompanied. 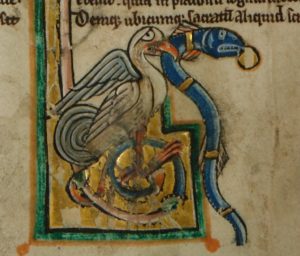 Another 13th century Latin Bible includes a cockerel at the foot of a capital I.  Although the drawing is a little crude, it is still recognisable, with its magnificent tail feathers. 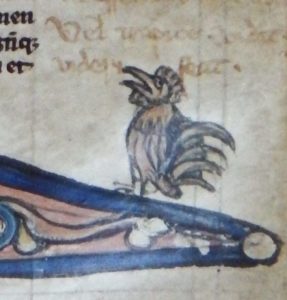 The Cathedral library includes several early printed books about the natural world, including the 3 volume Historiae Animalium (History of Animals) compiled by Conrad Gesner a Swiss physician, and printed between 1551 and 1558.  It is believed to be the earliest modern zoological work of its type.  Written in Latin, it is the first attempt to accurately describe the birds and animals and their habitats, although it does include several mythical creatures including the unicorn!

The volume on birds is illustrated throughout with hand-coloured woodcuts.  The peacock is particularly spectacular. 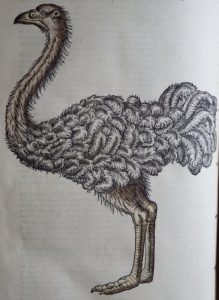 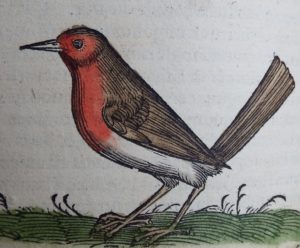 John Latham’s A General synopsis of birds was printed in 1781 and is full of hand coloured plates and brief descriptions of each bird.  Latham was a physician and ornithologist.  According to his preface, the 7 volume set is meant to “give as far as may be, a concise account of all the birds hitherto known; nothing having been done in this way, in the English language, of late years”. 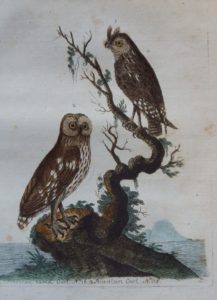 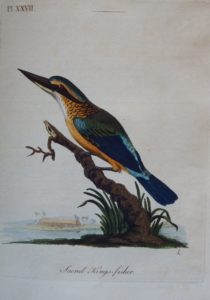 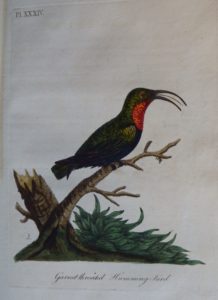 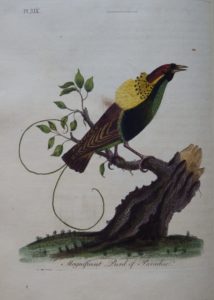 The colours of the feathers of the Magnificent Bird of Paradise are described in great detail.  The author apparently saw an example in the collection of Sir Joseph Banks; this being in the days when it was acceptable to keep collections of stuffed birds.  The books describe many new species which Latham had discovered in various museums and private collections.  Nowadays we prefer to see these beautiful creatures in the wild in their natural habitats.