Lincoln Cathedral has announced the winner of its first ever artist of the year competition.

Held in the Cathedral grounds at the start of September, the competition was open to all artists – amateur or professional – with a brief to capture any part of the Cathedral or surrounding area. It was judged by the Very Revd Christine Wilson, Dean of Lincoln, and local artist Dominic Parczuk who was Lincoln Cathedral’s artist in residence in 2017. 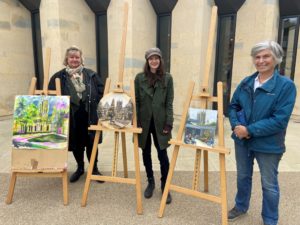 ists took part, with one travelling from West Yorkshire to be involved. They had only four hours to create their work, before three finalists were chosen; Rosie Ablewhite, Sally Kheng and Rosemary Burke. After careful consideration, the Sally Kheng was announced as the winner and her picture will now be framed and will be exhibited for the next 12 months in the new cathedral visitor centre.

Sally said, “I’m delighted to have won the competition and that my painting will be displayed in the new visitor centre. I’m usually a landscape artist and so this was a big challenge for me.”

Dean Christine said that it was inspiring to see the creativity and vision of all the artists who took part. “We have the joy and privilege to see this wonderful building every day and in all seasons, and it remains a wonder every time, but to see it through new eyes by the artworks which have been created as part of this competition is refreshing and rewarding. 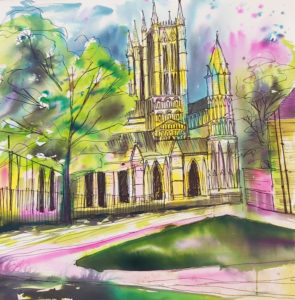 “I want to thank all those who have taken part, choosing a winner was not an easy decision, but Dominic and I loved the energy and passion that Sally’s picture conveyed. I hope it inspires others to uncover their creative talents and enjoy looking in detail at the world around them.”

The competition will return next year. Keep an eye on Lincoln Cathedral’s website and social media for more details in 2022.