Lincoln Cathedral is preparing to say a very fond farewell to one its longest serving members of staff.

On Sunday 21 June, the Dean’s Verger John Campbell will retire after 30 years at Lincoln Cathedral.

John Campbell joined Lincoln Cathedral as Dean’s Verger in 1990, and has been a profoundly committed, expert and energetic member of the team, faithful to his role, to the Cathedral and to God. 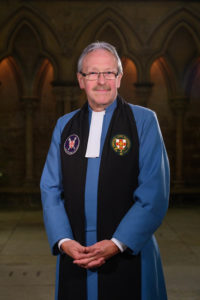 During his time as Dean’s Verger John’s varied role has encompassed every aspect of life in the Cathedral from the daily pattern of worship and managing the many tourists who visit the Cathedral each year, to coordinating large scale, special events including the visit of Her Majesty the Queen in 2000 to distribute Maundy Money or the filming of the Da Vinci Code in 2005 featuring Tom Hanks, Ron Howard and Sir Ian McKellen.

In his 30 years at the Cathedral, John has become a passionate ambassador for the building, its worship and the role of verger, being a senior officer of the Church of England Guild of Vergers. In 2016 his distinguished career and ministry was recognised with the award of the British Empire Medal.

The Very Revd Christine Wilson, Dean of Lincoln, said that it was not possible to overestimate the good that John has done for the Cathedral and the city of Lincoln. “John has been at the heart of Cathedral life for more than three decades; a constant presence and voice of experience. His faith, dedication and ministry here have inspired many people and his legacy will be felt for many years to come.

“More than anything John is a ‘people person’ – he knows how to make everyone welcome and his enthusiasm is infectious. Everyone that has worked or worshipped in the Cathedral during the last 30 years will have had the benefit of John’s expertise in some way and each will have their own special memories of his time here.

“We’ll miss his knowledge, counsel and wit in our daily lives, but look forward to his continuing presence in our community and wish him every blessing for a very well deserved retirement.”

The team at the Cathedral have plans to mark John’s final day on Sunday and make it a memorable occasion, but a full formal farewell to John will take place later in the year when the restrictions currently in place due to COVID-19 have been lifted, and everyone can join together to celebrate John’s amazing career and give thanks for his service to the Cathedral.