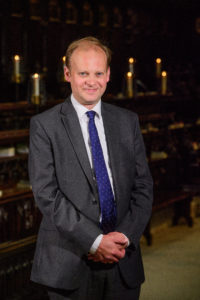 Jeffrey Makinson is Assistant Director of Music and Sub-Organist of Lincoln Cathedral. He is also a tutor for the Royal College of Organists Academy and Music Director of Beverley Chamber Choir.

Jeffrey returned to Lincoln Cathedral in January 2015. As part of his duties in Lincoln, Jeffrey directs the Girls of the Cathedral Choir and accompanies the Cathedral Choir for many of the choral services. Alongside his work in Lincoln, he maintains a busy schedule as a recitalist, accompanist, conductor, teacher and adjudicator in the city and throughout the country.

As a recitalist, Jeffrey has performed at most of the major British Cathedrals, Abbeys, Collegiate Chapels, Churches and Concert Halls, including numerous recitals at Westminster Abbey, Westminster Cathedral, St. Paul’s Cathedral and King’s College, Cambridge. Jeffrey has also performed in numerous foreign countries including Czech Republic, France, Germany, Holland, Hungary, Ireland, Italy and the USA,  and as an orchestral musician has worked alongside some of the country’s leading ensembles, including the BBC Philharmonic Orchestra, Hallé, Liverpool Philharmonic Orchestra , Manchester Camerata, Northern Chamber Orchestra and the Philharmonia Orchestra.

Jeffrey has made numerous CD recordings, with the Albany, Delphian, Herald, Lammas, Naxos, Priory and Regent labels. He works extensively for the BBC, as regular musical director and organist for Radio 4 Daily Service. In addition, he has worked on programmes such as Songs of Praise, Chorister of the Year, Choral Evensong, Minstrels in the Gallery, Young Musician of the Year, Sunday Morning Worship and the Radio 4 Pilgrimage to Rome. Since 1998, he has been Organist in Residence at the Exon Singers Festival in Devon.

The Programme for this concert will include works from

Tickets are sold as non-returnable and non-refundable.

This programme is subject to change with no notice. We reserve the right to cancel this event. If we do need to cancel all tickets will be refunded.