By the Very Reverend Christine Wilson 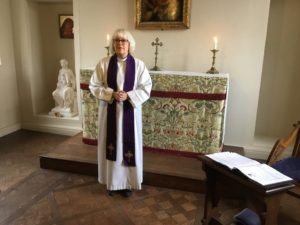 I first began to understand the nature of sheep when I moved from city life to spend a few years in the beautiful countryside of the Peak District in the heart of the English midlands.

I have three particular images from that time which I think can help us to understand the vulnerability of sheep.

The first was the time I discovered a sheep caught up in a thicket of thorns. The more it struggled the more it hurt itself and became even more tangled. It was helpless and vulnerable to attack. I called the local farmer to rescue it.

Then there was the time I glanced into a field and saw a big fat ewe stuck upside down with its legs in the air unable to right itself. It wasn’t happily basking in the sun, it was dying because without rescue left for too long in that position, it was likely to suffocate.

The final image is rather cute. It was a particularly ferocious early spring and lambing had just started. The rain had been falling in torrents for weeks on end. As I passed a field I noticed lots of bright red plastic and was curious. To my amusement all the new lambs were wearing little red raincoats to protect them and keep them dry.

Jesus uses the image of sheep to describe us as those who are vulnerable to predators, susceptible to danger, inclined to get lost and having a herd mentality.

Identifying that we are the sheep in the story and Jesus is the Good Shepherd is the easy bit. But what about Jesus as the Gate?

It helps to know that sheepfolds came in two varieties. I read somewhere that there was the town version where several flocks could be held together with a porter or doorkeeper. The Shepherds would come in the morning and the sheep would respond to their distinctive call and would be led out to pasture It was important to know your sheep not least because the Shepherd was accountable for every one of them.

The other was the remote sheepfold out on the hills. A circle of stones with an opening. The Shepherd would lie across the entrance to keep the sheep in and wild animals out. The Shepherd as the gate.

Shepherds knew their sheep. They protected, guided and provided for them and were constant companions. They were ready to lay down their life to save the sheep.
In our Gospel today, Jesus gives I us these two images of Gate and Good Shepherd to describe the life and relationship that he offers each of us.

We are reminded of all this in Psalm 23

The Lord is my Shepherd, therefore I shall lack nothing, he makes me to lie down in green pastures and leads me beside still waters – he restores my soul.

But being followers of Jesus invites us not only to receive the life he offers and invite others into the security of the fold, but also to become like him as Good Shepherds and Gates offering his love, his protection and his care.

In these days we know that many are exhausted, needing protection from harm or illness, anxious about the future, lost or alone.

Jesus calls us by name and he bids us to exercise leadership, setting before us his example as we care about the safety of the vulnerable, look to the needs of the hungry and draw all who are lost into the green pastures of his life and love.