After Lincoln Cathedral Connected was designated £12.4million by the Heritage Lottery Fund to undertake ambitious restorations and renovations to the Cathedral, a team of expert archaeologists were appointed to assess the area and belowground archaeology of the site before any works were undertaken. 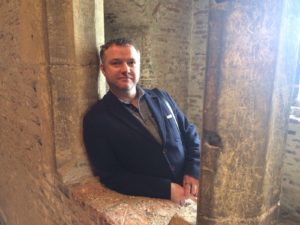 Mark Allen from Allen Archaeology Ltd shares his experience working on the Lincoln Cathedral Connected project and some of the amazing discoveries along the way.

I have always viewed Lincoln Cathedral as a cut above all others, bar none, so was delighted when we were chosen to provide archaeological services to the Cathedral Connected project back in 2014.

Working with the Cathedral Archaeologist Emeritus Dr Philip Dixon, and then his successor upon retirement, Lincoln Cathedral Archaeologist Dr Jonathan Clark, we have investigated the Close over the last few years to assess the belowground archaeology and how to protect it from the groundworks for the new visitor centre and other works, by preserving it in the ground or by excavation.

Due to the sensitive nature and importance of the archaeology in the grounds of the Cathedral, many meetings have been held with Historic England and with the City of Lincoln Archaeologist, Alastair MacIntosh, to get to the stage where we are currently putting in place a plan of action to ensure the archaeology is looked after before, during and after the construction phase of the project.

Over the last four years we have made a number of amazing discoveries, including re-discovering the medieval Deanery and Works Chantry, both complexes of medieval buildings surrounding a courtyard immediately to the north of the Cathedral. The buildings were demolished in the Victorian period as they were in poor condition; however, at the time of their loss it was noted that they had some of the finest medieval architecture in Lincoln! Antiquarians at the time sketched the buildings and also drew maps of the floor plans, so we have a good idea of what they looked like. We can even work out what each room was for and can identify the colour scheme of some of the rooms by the recovery of painted plaster.

Although the medieval buildings are at 1m below the modern ground surface, we have sunk boreholes that revealed another 4m of archaeology below!

We believe the very lowest remains are parts of the Roman fort dating to when the area was conquered around 50 AD. The fort was then turned into a Colonia (Lindum Colonia), a settlement for retired veteran Roman soldiers. Timber barrack blocks that would have been used by the soldiers were then replaced by domestic and urban buildings of stone.

By the end of the third century, Lincoln had become the capital of one of four provinces of Roman Britain. The area most likely saw further development with government buildings being constructed, although the area as well as most of the city was then abandoned at the end of the Roman period. Once the place was deserted, a deep soil called ‘Dark Earth’ formed, most likely produced by a build-up of rubbish and leaf matter every autumn. From the ninth century to early eleventh century, the area was most likely occupied again by the Vikings, Saxons and then Normans, so rubbish and cess pits may well exist here (there is usually little evidence for their houses as these were of timber and have since rotted away).

The West Front of the Cathedral was constructed soon after the Norman Conquest. Over the following centuries the area would have often resembled a huge building site with wooden scaffolding up whilst builders constructed the nave and transepts, stone masons trimmed quarried stone on site to build the walls, lime mortar was mixed and lead was smelted for the windows, etc. During this time the medieval Deanery was built to house the Dean and the Works Chantry to house some of the clergy.

Today, we are getting ready to reveal more of the medieval Deanery complex, as well as probable graves around the Cathedral. Most intriguingly, a scan of the ground in the Close using Ground Probing Radar (a survey technique that can produce 3D maps of structures hidden beneath the surface) has revealed a previously unknown massive curving wall that is probably several metres thick.

Could this be part of an earlier Saxon Minster, or perhaps a Roman palace? Soon we will be able to find out…