An extremely rare 12th century seal matrix has been rediscovered in Lincoln Cathedral, allowing researchers to better understand the history of one of Britain’s most extraordinary landmarks.

Found during an audit of the Cathedral’s extensive collections as part of the National Lottery funded Lincoln Cathedral Connected project, the small silver object was confirmed to be the 12th century seal matrix used by the Dean and Chapter to officially give documents a seal of approval. 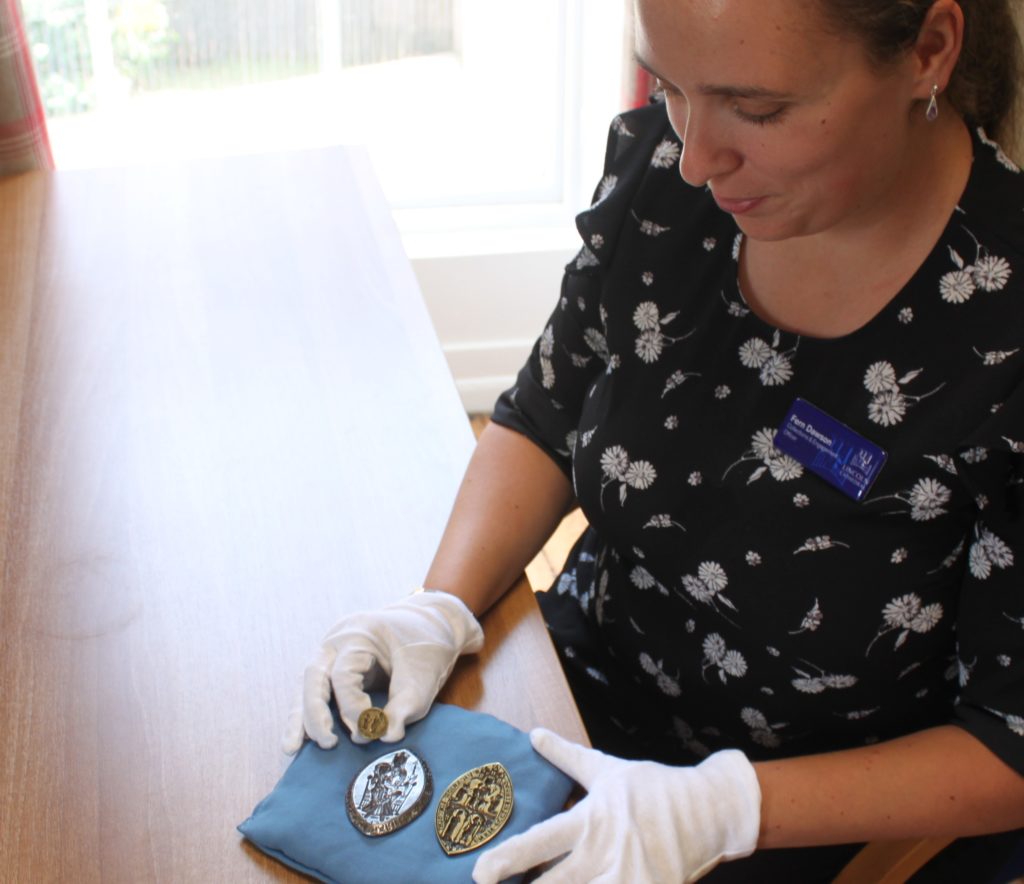 Only a handful of silver institutional matrices like this one have survived. Another like it, but from the 13th century is the Chichester matrix at the British Museum. The treasured Lincoln matrix was found in a box of previously uncatalogued replicas and was believed to be Victorian in date until a closer look revealed the truth.

She said: “Discoveries really don’t get much better than this! From finding the seal in the store, to having its identity revealed, this has been an amazing journey of discovery and will always be a day to remember. For years the Cathedral had confused the true seal with a much later 19th century copy, which had in recent years been exhibited in London and Germany. The discovery of the real 12th century seal is an amazing surprise.”

A number of specialists have examined the matrix closely, including academics from the University of East Anglia and the British Museum.

Lloyd de Beer, Ferguson Curator of Medieval Europe at the British Museum, said: “Institutional seal matrices like this are extremely rare, especially in silver and from such an early date. The Lincoln seal is a joy to behold. It is a masterpiece of micro sculpture made by a truly skilled goldsmith. What’s more, the reverse contains beautiful swirls of niello surrounding an enthroned Christ.”

One of the experts called on to confirm the identity of the seal, Dr Lesley Milner FSA, said: “The silver matrix of the Great Seal of the Chapter of Lincoln Cathedral has a world-wide reputation as a rare piece of 12th century craftsmanship, but until recently no one in living memory had seen or handled the real object. Since 1893, important Cathedral documents have been sealed using an electrotyped copy while the true matrix has lain hidden and unrecognised within the Cathedral store.

“It was a hugely exciting moment for us all when this forgotten art work was rediscovered and put into the hands of Professor Sandy Heslop, an authority on 12th century metalwork. For a moment there was silence and then he said ‘Wow!’, realising that Lincoln had re-acquired a supreme piece of Norman art.”

The seal depicts the patron saint of Lincoln Cathedral, the Virgin Mary. She is shown crowned and seated on a throne, holding the infant Christ in her lap. In her left hand she holds a flowering rod topped by a fleur-de-lis. The replica was possibly created by Robert Ready or one of his sons, whose names were signed on a number of replica seals found in storage.

The Dean of Lincoln, The Very Reverend Christine Wilson, said: “To rediscover this piece of living history is extraordinary. It is inspiring to imagine the story it holds of documents and transactions sealed throughout the centuries by ancient predecessors.”

Alongside the Chapter Seal, two further rare matrices were also discovered in the same box, including a 13th century seal matrix of the Vicars Choral and a 14th century ‘Sacrist’s Seal’, a small, personal seal matrix belonging to a cleric named John.

Fern Dawson added: “It’s a privilege to be able to share the stories from Lincoln Cathedral’s collection and we’re especially excited for visitors to be able to see the seals on temporary display in the Cathedral’s Treasury where they can get a closer look and find out more about these amazing objects.”

From the research audits to extensive restoration works, the Connected project has been made possible by money raised by National Lottery players and awarded by the Heritage Lottery Fund (HLF).

Jonathan Platt, Head of HLF East Midlands, said: “I’m delighted that National Lottery players’ contributions have helped to uncover this amazing artefact. We awarded £12.3m of funding to the Connected project to redevelop the visitor experience at Lincoln Cathedral. Who knows, this could be the first of a number of exciting discoveries as project progresses.”