The Revd Canon John Patrick has announced that after more than 8 years he will be leaving Lincoln Cathedral in the spring. 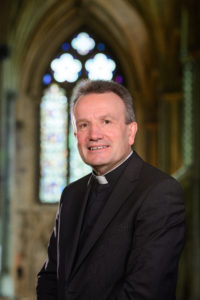 John Patrick has been Subdean at the Cathedral since February 2012. As well as playing a central role in worship and pastoral care, the Subdean also has oversight of the conservation and restoration of the building. In recent years, a significant focus has been the National Lottery-funded Connected Project, which includes a new visitor centre and important restoration and conservation work.

John’s decision to leave the Cathedral comes as the Visitor Centre is set for completion, with an opening planned for the summer. He explained, “For me personally the time is right for a change, and with Connected now well into its delivery phase, I’m leaving safe in the knowledge that this wonderful project into which so many people have invested their skills, creativity, knowledge and effort will very soon be open for everyone to enjoy.

“While there have undoubtedly been challenges along the way, it has been wonderfully rewarding to be a part of the Cathedral community and I treasure the time that I have spent here and the friendships made.”

Rebecca Thompson, Acting Chapter Clerk, praised John’s dedication to all aspects of life at the Cathedral, in particular his drive and tenacity in the early stages of the Connected Project. “John has the rare privilege of leaving behind a physical legacy in the form of the new Visitor Centre, which will allow more people than ever to share in the wonder of Lincoln Cathedral. But the foundation of what we see today is based on John’s years of negotiation, planning and sheer determination to get the project off the ground. That largely unseen work leaves us with a fantastic resource to share with visitors for generations to come.”

As the Subdean prepares to say goodbye later in the spring, he expressed his sadness at leaving behind skilled colleagues, close friends and the vibrant Cathedral community. “During the time I’ve been here, I’ve been lucky enough to build fantastic relationships with many people both at the Cathedral and more widely in the City of Lincoln, so naturally there is sadness at leaving, but I am also excited for the future and look forward to discovering what lies ahead.”

The Venerable Mark Steadman, Acting Dean of Lincoln paid tribute to the Subdean saying that he would be greatly missed. “John, has had a distinguished ministry at Lincoln Cathedral, and leaves behind a rich legacy, not just in the physical form of the Connected Project and conservation of the West Front, but also in the impact he has made on Cathedral life.

“He has been a wise and faithful pastor to the Cathedral community for which many people, myself included, are immensely grateful. Everyone at the Cathedral is enormously thankful to John for sharing his skills with us, caring for his congregation and colleagues, and demonstrating kindness, leadership and compassion through all of his work.”